This is part 7 of an ongoing serial fiction. Part 1 can be found here. 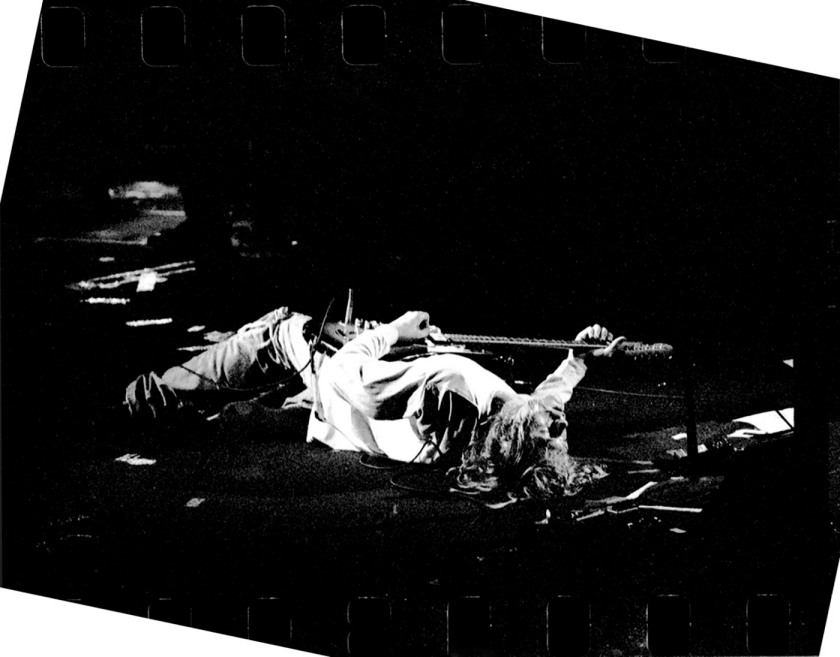 I don’t know Dave Grohl very well, or at all really, but he doesn’t strike me as someone who is often left speechless. But with the long-dead Kurt Cobain, either alive or (for all Dave knows) in ghost form here in front of us, he is exactly that, speechless.

Dave’s bottle of Heineken hits the thinly carpeted floor with a thump. “What… the… fuck…” he says.

Kurt stands inside the vocal booth of Dave’s home studio. There are 20 feet and two planes of glass between us. He’s dressed as he might have been twenty years ago, a flannel shirt and jeans with the knees torn out and he’s staring intently at Dave with his piercing blue eyes. The ceiling spotlight produces extreme shadows on his face and gives him an otherworldly look.

It’s up to me to make sure the intercom is activated. I surreptitiously seek the “on” button on the control panel and place my palm on it, activating the mic. Standing next to me, Dave is going to need to be able to hear what Kurt has to say. I give Kurt a small nod to signal that he’s good to go.

“How far the meek hath risen…” Kurt says low. He can be heard clearly, thanks to the intercom.

“Are you. . . are you seeing this?” Dave asks me, his eyes darting between me and the apparition. I try and wear a surprised look on my face. I nod and look back to Kurt.

“I can’t go away, Dave. Because of you, because of what I hath wrought unto the world.”

I look over at Dave. His lip trembles. He looks like he’s about to collapse.

“Your music. You need to stop.”

It’s as if Kurt has smacked Dave in the face with his words. Dave is clearly surprised by what he’s hearing – after all it is being delivered by a ghost – but that’s not all there is. There also a look of recognition, of understanding, like Dave has been waiting for these words. Like a criminal caught red-handed there’s relief in knowing that the jig is up. Kurt is in Dave’s head big time.

“You’ve become a cheese-dick. And you need to stop! And then you have to beg forgiveness from me and from the people.”

“I will! I’ll do it! I’ll stop.” He’s full on crying now. Tears streak down his cheeks.

“You’ve known this. You know your music sucks. You need to stop the harm the Foo Fighters are doing. And you need to repent.”

“Shut the fuck up!” Kurt commands.

Dave is shaking and sobbing, it’s really pretty remarkable how completely he’s devolved. Still, despite his reduced state, you can tell he isn’t going to be able to keep his mouth shut. He physically can’t stop talking!

Sure enough Dave begins anew, “Kurt. Thank you for coming. Thank you for showing me the error of my ways. . .” The look in Kurt’s eyes softens a little, so Dave continues, ““Puh-puh-please, tell me, what can I do?”

“Listen carefully. I’m won’t repeat myself and you will not see me again.”

The ghost of Kurt Cobain is telling Dave to shut up, but he literally, pathologically is unable to. It’s really pretty amazing.

“Dude, what is wrong with you? I forgot this shit about you. . .” Kurt says. “So annoying! Would you just please shut your mouth and be quiet for thirty seconds?”

I have to try hard not to laugh. Who knew Dave Grohl was such a spaz? Dave looks like a chastened child that’s trying desperately not to talk

“This is what you are going to do.” Dave nods and Kurt continues, “You will announce your retirement. You will tell the world that you’ve realized that the last 20 years of your life has been a betrayal of the good work you did in Nirvana. You will apologize for besmirching my legacy. You will atone for the sin of hubris and apologize for creating shitty frat-party-bro-rock. You will retire from public life and you will no longer make music. You will say these things only once. And then you will be quiet and go away. Do you understand?” Kurt asks.

Dave is weeping, but I detect less sadness than I would have imagined if a ghost from my past came and told me to go away forever. Dave nods his head in agreement. “Yes,” he says. “Yes, I will repent and I will retire. Thank you, Kurt.”

“And you will apologize for all the shit you said about Nickelback!” Kurt shouts.

Dave looks up, doubly surprised. For the first time, I see a glimmer of the idea that he just might, just might be being had. Unfortunately for him though, the word “Nickelback” was a signal. A second of two after Kurt says it, the power goes out.

We are suddenly and completely awash in total darkness. I can’t see anything. I can still hear though and what I hear is a woman howling.

The shouting is so loud! And at a pitch I can hardly imagine coming from a human. And then I realize that what I’m hearing is Dave’s terrified wailing. He’s like a toddler woken from a bad dream screaming inconsolably. The dude sounds like a baby girl!

When it’s clear he’s not going to stop screaming – after maybe 30 seconds – I move towards his shouts and grab him by the shoulders.

“Dave! Shut the fuck up man! Get a hold of yourself!” I shake him. Hard.

He still won’t stop though. I don’t know what else to do so I grab him in a bear-hug and squeeze. It’s awful and so uncomfortable. I’m angry with the famous musician for making me do this. For making me hold him in a pitch black basement as he acts out like a fucking hysterical baby. Dave claws at my body for dear life, like he’s drowning or something.

“Jesus dude! Get a fucking grip!” I say just as the lights come back on. He, finally, goes quiet and his eyes focus. He seems to register his surroundings.

“Dave! I’m coming man!” we hear Sonny shout from the other room.

He looks over at the vocal booth where less than a minute ago, Kurt was standing.

“Kurt man! Kurt! Come back!” Dave screams and his tears start anew. Who knew Dave Grohl was such a flat out pussy. I wish there was another word for it, but I’ve never seen anything like it. I mean, the dude just fucking fell apart.

Sonny comes fumbling into the room. “Dave! Are you okay? Why were you shouting?”

“Kurt was here man!” Dave shouts. “Right there!” He points at the now vacant vocal booth.

“What the fuck are you talking about?” Sonny asks.

“Kurt was here man! He came back to give me a message. Just ask this dude,” Dave says nodding in my direction.

Sonny looks to me, confused.

All I can do is nod. Kurt was here all right.

You’ve just read the seventh installment of “Kurt Cobain Lives.” If you liked what you read, how about leaving a comment? You can read the final segment – Part 8 here.