This is part 2 in an ongoing serial fiction. Read part 1 and learn how the narrator came to be sitting in an office with the long-dead front-man of Nirvana.

“Allow me to introduce my client, Mr. Kurt Cobain. Contrary to popular belief, alive and in the flesh,” Consuelo says.

In 1993 I saw Nirvana play live at the San Francisco Cow Palace, which is basically a stadium. I recall thinking Kurt looked very small on the huge, distant stage. At the time I attributed it to the enormity of the venue and perhaps Krist Noveselich’s absurd height at stage right, but here, the figure on the couch, thin as a rail, was a man of similarly small stature. 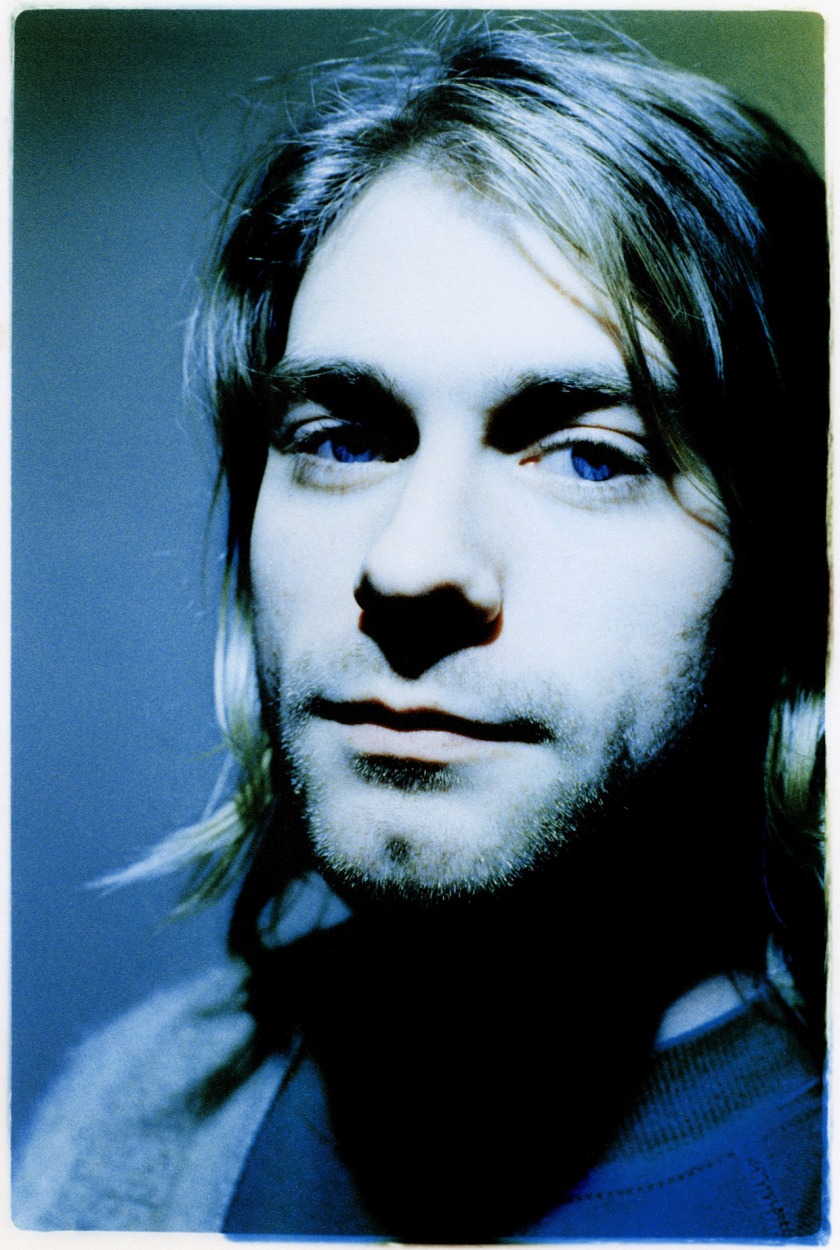 Consuelo is telling us this man is none other than my musical hero, a man who I, and the rest of the world, have long believed to be dead. I want to believe it’s true, but I can’t take it at face value, despite what I am seeing with my own two eyes. He really does look like Kurt though. Or look like he would look, if he were alive.

The man he claims is Kurt sits lightly on the couch cushion, his placid facial expression not changing despite the mention of his name. Maybe he’s waiting for my shock to wear off. Maybe he’s used to seeing shock on people’s faces.

“And this is John Hemmer. John is in charge of Kurt’s security.” Consuelo indicates the man sitting at the opposite side of the couch. I look over at him and he nods. Something about how this guy is sitting makes me realize he’s nothing if not capable of violence. Despite his ordinary clothes, jeans and an Oxford shirt, despite his relaxed demeanor, he still gives the impression that his body is like that of a compressed spring, ready to violently unwind at the slightest provocation. Simply from the contours of his neck it’s clear he’s in good shape.

“Well, this,” Martin says, “I did not see coming.” I look over at Martin. He’s so calm. It must be a German or a Danish thing. Those Central/Northern Europeans do stoicism really well. It must just come naturally to them. I do not feel calm.

“You couldn’t have,” Kurt says. Good Lord! That’s his voice. My doubt falls away. It’s him. His voice is plain, almost but not quite soft, with that almost surfer like twang to his speech pattern. Then there’s the slightest gravelly quality to his speaking voice, the same quality that becomes so much more pronounced when he screams. Kurt fucking Cobain. 20 years peel back in an instant. “I’ve really enjoyed reading Victimless Crime over the years. I’m a big fan.”

“Thank you.” Martin says. Kurt hoists himself off the couch and shakes Martin’s hand. He moves gingerly, slowly, purposefully.

“And Jonas, I’ve consistently appreciated your writing as well,” Kurt says, shaking my hand. His hands are soft and his grip nearly non-existent. He settles back onto the couch.

“Thanks… Jesus Christ.” I’m still in shock. I’m basically convinced its Kurt but there’s still a logic disconnect. This event, what is happening right now does not compute. “Wait a second. You guys are fucking with us…”

“Fuck, I have so many questions.” I say. I guess I really am coming around to accepting this as reality.

“Very few people know Kurt is alive. You are in very exclusive company.” Consuelo interjects. He stands beside us looking down at Kurt and John on the couch. “Over the years we’ve – mercifully – managed to keep his ‘alive’ status a very closely kept secret.”

“Does Courtney know?” I ask. “What about your daughter?”

“Courtney does not know. But we were able to tell Frances… when she turned 13,” Kurt says. He’s calm. His skin glows. He looks healthy. It’s an odd combination, his evident vitality with the delicate way he carries himself, like that of an old man. It’s so different from where he was at, well before he… well… before he killed himself. Back in 1993 and 1994 he was a zitty, pale drug addict. His skin was a greasy mess. The man in front of me however has shoulder-length blond hair that looks like it’s ready to be the main attraction in a shampoo commercial. His eyes are bright, comprehending and alert.

His fashion sense doesn’t seem to have changed much. He wears faded blue jeans with a few small tears in them here and there, but they look clean. His long sleeve shirt is unremarkable except for that it’s made of a softer material than flannel, perhaps linen. There’s a t-shirt underneath with a frayed collar. I can’t see if there is a band logo on the shirt. His sneakers are newish low-rise, white Converse all-stars.

“I wouldn’t say for show… for survival, really. But yeah, it wasn’t real,” He says. “Please, sit down. Make yourselves comfortable.”

“What the hell is going on here? I feel like I’m in a dream or something.”

“Please. Yes, have a seat and relax, Mr. Lapkus,” Consuelo reiterates. “We’ll explain all of it. Including why we’ve asked you here today.”

Audrey pushes a chair away from the wall and towards me. Consuelo gestures at another chair for Martin. I sit. I wish I still smoked cigarettes. A cigarette would be good right now. Maybe Kurt has one.

“Do you still smoke cigarettes?” I ask him.

“Shit. Does anyone have a cigarette?”

I look around. The room is quiet. Nobody bothers to answer me. Audrey shrugs. Times have changed. It sure as hell isn’t 1994 anymore.

“How do you fake blowing your head off with a shot-gun?” The question just pops into my head and I say it. It’s not the most important piece of information. But before I’ve really even understood what I’ve said I’ve asked it.

“Think about it. I needed a way to go out where there wouldn’t be a million questions, where no one would need to see my dead body. If I’d tried to hang myself or staged a killing or something like that, nobody would’ve believed it. Not without a close inspection of my cadaver,” he says.

“Let me try and explain…” Consuelo interjects. “I’d been managing Kurt’s financial affairs since shortly after “Nevermind” became a hit. Over the years Kurt and I grew close, well close enough for him to believe me – or at least take me seriously – when I told him I’d seen this movie before. That it was clear he was headed toward a bad end, so, I suggested an alternate. . .path.”

“I mean, it wasn’t exactly a secret that I had a love/hate thing going with the spotlight. The fame… But I could see, even through the haze of being dope-sick and drug addled that Vincent was right. Courtney was driving me nuts. I wanted out. Christ, she probably wanted out too, even if she didn’t realize it. The band was done. The only thing that was worth sticking around for was Frances. But I knew I wasn’t even going to have that. Not with the state I was in. Courtney would have fought a divorce tooth and nail. I was so fucking strung out. She would have used Frances against me. So, when Vincent approached me…”

“At first it was just to get him clean. Spirit him off somewhere remote. Tahiti or Vietnam. At least until he was straight and could put his affairs back in order,” Consuelo says.

“But while I was at Horizons, you know the rehab, Gibby said something off-hand about just disappearing altogether.”

“—wait a second. Gibby? Gibby Hanes from the Buttholes?” I say.

“Yeah, he was my roommate at Horizons. The same place that I quote ‘broke out of’ unquote before I went missing. But when he said it, it didn’t have anything to do with anything. It just gave me the idea.”

“The idea to make ‘going away’ more than a celebrity rehab vacation,” Consuelo adds.

“Jesus, this is incredible,” I say.

“Have you been making music?” Martin asks.

“Well yeah, that’s kind of half the reason you guys are here,” Kurt says.

I see Consuelo is a little frustrated. “Slow down, guys. Slow down. We’ll get to it. Okay?”

“Half the reason?” Martin wonders aloud. “Then what’s the other half?”

For a second nobody says anything. It’s quiet and almost… awkward.

You can read part 3 of this ongoing serial fiction, here.