I’m loose and relaxed as I start down 4th Street from Avenue A. I’ve still got the remnants of the dope I snorted 3 hours earlier running through my system and the beer sloshing around in my belly is making me feel a little sleepy.

“Satisfaction” is a great dope spot. First and foremost because it’s usually pretty easy to get in and out of. It’s also convenient, just 6 blocks from my house. Carlos, one of the two regular dealers, even gave me a free bag on my birthday last summer. Talk about customer service! That’s the kind of customer loyalty type thing you’d expect from a Bonker’s FunHouse Pizza – Not a heroin dealer. 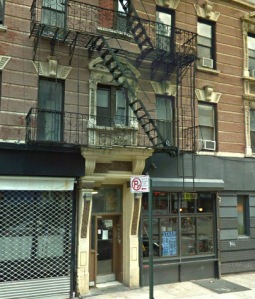 I spot the overweight, black lookout dude leaning against an iron fence mid-way down the block – in his usual spot. He nods at me without making eye contact. I’ve always thought he looked a lot like Biggie. He keeps an eye on things from the West. There’s another lookout on Avenue B to the East and a 3rd dude that makes sure the line to get in the building stays orderly.

I love the excitement of scoring drugs, my nerves tightening up and the anticipation in the pit of my stomach. Of course if I were to get busted I doubt it would be so thrilling, but so far so good. I’ve yet to get busted – at least not copping dope. I’ve been caught with weed but that’s different.

As I approach the corner I see the line to get into the actual building where the dealer stands. There are only 4 or 5 people in line, which means a fairly short wait. The skinny black dude that watches the line stands with his back to us. He’s the one to wave the next customer in to the apartment building foyer when it’s their turn. I close the distance and get in line behind a couple of metal chicks that look like they’re from New Jersey. I don’t mean to generalize but that’s what the frosted tips on their hairdos are screaming, “New Jersey! New Jersey!” None of us customers, most of us white, make eye contact or speak with one another. From experience I know I shouldn’t be hanging around out here for more than a minute or two. Which is good, because this is the most vulnerable part of the routine. I always feel a little exposed standing in line on an otherwise derelict street corner with a bunch of drug addicts. I mean what if my mother was to see me standing here? She lives 300 miles away but still. It’s more of a philosophical dilemma than a practical one.

A skinny white dude walking a friendly looking pit bull with an enormous head passes the line and pivots to stand behind me. The dog seems friendly enough but there’s only one reason to have a dog like that in a neighborhood like this. The lookout glances up and shouts, “Get that dog out my line!”

The guy with the dog sighs, turns and walks off down the block. Gotta wonder what he was thinking.

A Latin looking dude with a black leather motorcycle jacket comes out of the buildings’ heavy front door and fast-walks away from us, his head down. The door slams shut behind him. The line watching dude yells, “next” and a skinny white chick in big clunky Doc Martins and a skuzzy looking sweatshirt with the hood pulled up, has to pull on the door with both hands to open it enough to squeeze through. It’s not more than 20 seconds before she slips out again and passes back in front of us. I get the quickest glimpse of her delicate face as she walks past. An irritated purple zit on her chin is practically all I see it stands out so prominently on her pale complexion.

Next in is a nebbish looking, curly haired Jewish dude. The guy is a ringer for a young Albert Brooks. He’s wearing a corduroy University professor’s sports coat, the kind with the leather patches on the elbows. He looks as calm as if he were buying a carton of milk at the corner store. I’m rarely surprised by the type of people you see copping drugs. I’ve seen men in business suits next to homeless people and homeboys wearing gold jewelry next to women wearing white-collar office garb with the chunky white Reebok sneakers – you know, the ones that make the walk to the office easier and more comfortable – the ugly ass shoes they’ll change out of when they get to work. The customers waiting outside a drug spot are representative of New York at large; there’s every type of person and their cousins using dope. Drugs are the great equalizer.